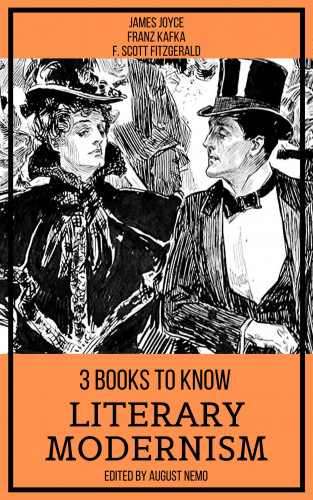 We will always select for you three great works to instigate your mind, this time the topic is:Literary modernism

- Ulysses by James JoyceThe Metamorphosis (German: Die Verwandlung) is a novella written by Franz Kafka which was first published in 1915. One of Kafka's best-known works, The Metamorphosis tells the story of salesman Gregor Samsa who wakes one morning to find himself inexplicably transformed into a huge insect and subsequently struggling to adjust to this new condition. The novella has been widely discussed among literary critics, with differing interpretations being offered.

The Great Gatsby is a 1925 novel written by American author F. Scott Fitzgerald that follows a cast of characters living in the fictional towns of West Egg and East Egg on prosperous Long Island in the summer of 1922. The story primarily concerns the young and mysterious millionaire Jay Gatsby and his quixotic passion and obsession with the beautiful former debutante Daisy Buchanan. Considered to be Fitzgerald's magnum opus, The Great Gatsby explores themes of decadence, idealism, resistance to change, social upheaval, and excess, creating a portrait of the Roaring Twenties that has been described as a cautionary tale regarding the American Dream.

Ulysses is a modernist novel by Irish writer James Joyce. It was first serialised in parts in the American journal The Little Review from March 1918 to December 1920 and then published in its entirety in Paris by Sylvia Beach on 2 February 1922, Joyce's 40th birthday. It is considered to be one of the most important works of modernist literature and has been called "a demonstration and summation of the entire movement." According to Declan Kiberd, "Before Joyce, no writer of fiction had so foregrounded the process of thinking".

This is one of many books in the series 3 Books To Know. If you liked this book, look for the other titles in the series, we are sure you will like some of the topics