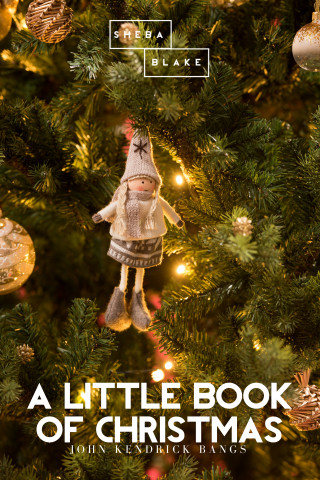 A Little Book of Christmas is a story written by John Kendrick Bangs. Four short Christmas stories, a bit sentimental, but still affecting and worthwhile. Plus Four Christmas verses. John Kendrick Bangs (May 27, 1862 – January 21, 1922) was an American author, humorist, editor and satirist. He was born in Yonkers, New York. His father Francis Nehemiah Bangs was a lawyer in New York City, as was his brother, Francis S. Bangs. He went to Columbia College from 1880 to 1883 where he became editor of Columbia's literary magazine, Acta Columbia, and contributed short anonymous pieces to humor magazines. After graduation in 1883 with a Bachelor of Philosophy degree in Political Science, Bangs entered Columbia Law School but left in 1884 to become Associate Editor of Life under Edward S. Martin. Bangs contributed many articles and poems to the magazine between 1884 and 1888. During this period, Bangs published his first books. In 1888 Bangs left Life to work at Harper's Magazine, Harper's Bazaar and Harper's Young People, though he continued to contribute to Life. From 1889 to 1900 he held the title of Editor of the Departments of Humor for all three Harper's magazines and from 1899 to 1901 served as active editor of Harper's Weekly. Bangs also served for a short time (January–June 1889) as the first editor of Munsey's Magazine and became editor of the American edition of the Harper-owned Literature from January to November 1899. In 1894, Bangs ran for the office of mayor of Yonkers, New York, but was defeated. He also was a member of the Board of Education in Yonkers. He left Harper & Brothers in 1901 and became editor of the New Metropolitan magazine in 1903. In 1904 he was appointed editor of Puck, perhaps the foremost American humor magazine of its day. In this period, he revived his earlier interest in drama. In 1906 he switched his focus to the lecture circuit.

John Kendrick Bangs: A House-Boat on the Styx
eBook-Download EPUB
3,99 €

John Kendrick Bangs: The Pursuit of the House-Boat
eBook-Download EPUB
0,99 €