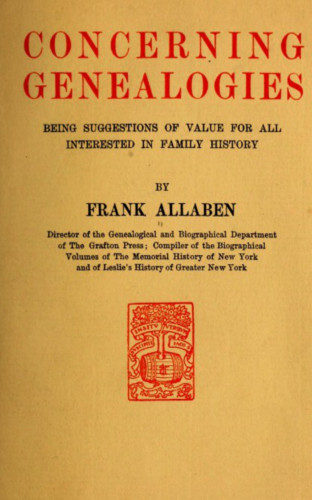 This little book puts the pleasure of tracing one's ancestry within reach of those who have had no previous practice. It covers every phase of the subject—the sources of information, the methods of research, the compiling, the printing, and the publishing of a genealogy.

Strong emphasis is laid upon the importance of employing the historical method, without which no genealogical work can become authoritative. If we may judge from most of the family histories in print, a vigorous protest against pernicious methods should be lodged with professional genealogists as well as with amateurs.

Special attention is also called to the radically different plans for genealogical works, one tracing the many descendants of a common ancestor, the other tracing the many ancestors of a common descendant. There is a general drift toward the latter, many having discovered the fascination of exploring their direct lines of descent who would not care to trace the collateral branches of a family "tribe." But a detailed plan of work devoted to the exhibit of the many lines of one's own ancestry is here formulated for the first time. This "Grafton Plan," as we have called it,—already carried into execution, and approved by experience,—will appeal to thousands for whom "tribal" genealogies have little interest.

Our little volume also offers something more than a mere theory of how to proceed in genealogical work. It tells of labor-saving notebooks devised for each kind of genealogy, and explains ways in which our own genealogical department is placed at the service of the reader.