From the Papers of Thomas Jefferson 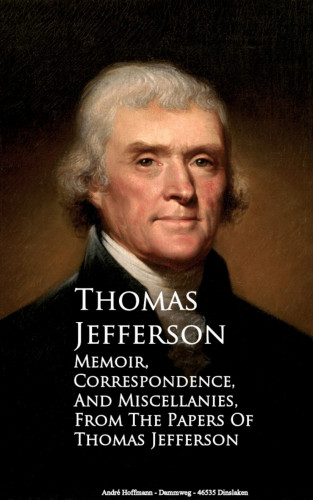 The opinion universally entertained of the extraordinary abilities of Thomas Jefferson, and the signal evidence given by his country, of a profound sense of his patriotic services, and of veneration for his memory, have induced the Editor, who is both his Executor and the Legatee of his Manuscript Papers, to believe that an extensive publication from them would be particularly acceptable to the American people.

The Memoir, contained in the first volume, commences with circumstantial notices of his earliest life; and is continued to his arrival in New York, in March, 1790, when he entered on the duties of the Department of State, of which he had been just appointed Secretary.

From the aspect of the Memoir, it may be presumed that parts of it, at least, had been written for his own and his family's use only; and in a style without the finish of his revising pen. There is, however, no part of it, minute and personal as it may be, which the Reader would wish to have been passed over by the Editor; whilst not a few parts of that description will, by some, be regarded with a particular interest.

The contents of the Memoir, succeeding the biographical pages, may be designated as follows:

I. General facts and anecdotes relating to the origin and early stages of the contest with Great Britain.

II. Historical circumstances relating to the Confederation of the States.

III. Facts and anecdotes, local and general, preliminary to the Declaration of Independence.

IV. An exact account of the circumstances attending that memorable act, in its preparation and its progress through Congress; with a copy from the original draught, in the hand-writing of the Author; and a parallel column, in the same hand, showing the alterations made in the draught by Congress.

Thomas Jefferson: The Declaration of Independence of The United States of America
eBook-Download EPUB
1,49 €