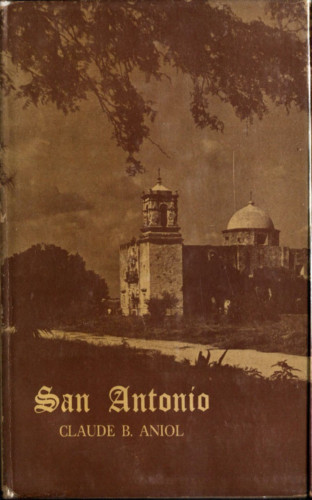 From a village of Tejas Indians has grown the modern city of San Antonio ... not completely modern, for there still remain many evidences of the past, even though towering skyscrapers mark the city as progressive and prosperous. San Antonio is filled with picturesque charm and interesting contrasts. Off busy downtown streets one will find in bold relief buildings, as well as customs, that date back to times when the city was settled by Spanish conquistadors.

The Spanish, fearing encroachment in Texas by the French in the late seventeenth century, set out to make good their original claims by establishing forts and missions in East Texas. Captain Don Domingo Teran de los Rios was named governor of the new Spanish dominion and, in 1691 during a journey across Texas accompanied by Father Damian Massanet, missionary and explorer, paused here at an Indian Village. Mass was said on the site, a great many salutes were fired, and the place was named "San Antonio".

No permanent settlement was established, however, but later other expeditions passing this way encamped here. The French explorer and trader, Louis Juchereau de Saint Dennis, claiming his interest to be the establishment of trade relations between Louisiana and Mexico, stopped near the headwaters of the San Antonio River in 1714, admired the charms of the place, and declared the location to be an ideal spot for founding a permanent community. St. Dennis' activity in the area aroused the Spanish authorities. Rivalry for the possessions of Texas broke out anew.

This step marked the real founding of San Antonio. Within the next thirteen years the building of four more missions got under way.