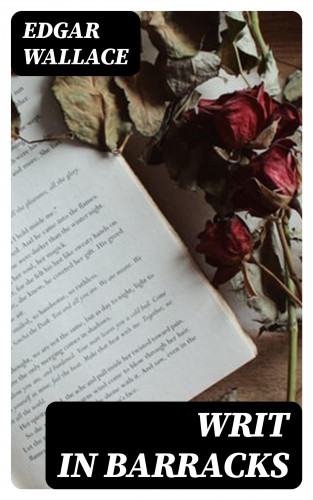 "Writ in Barracks" by Edgar Wallace is a collection of the author's military life poetry. Wallace was such a prolific writer that one of his publishers claimed that a quarter of all books in England were written by him. As well as journalism, Wallace wrote screenplays, poetry, historical non-fiction, 18 stage plays, 957 short stories, and over 170 novels, 12 in 1929 alone. More than 160 films have been made of Wallace's work. Excerpt: "WAR I A tent that is pitched at the base: A wagon that comes from the night: A stretcher—and on it a Case: A surgeon, who's holding a light. The Infantry's bearing the brunt— O hark to the wind-carried cheer! A mutter of guns at the front: A whimper of sobs at the rear. And it's War! 'Orderly, hold the light. You can lay him down on the table: so. Easily—gently! Thanks—you may go.' And it's War! but the part that is not for show."