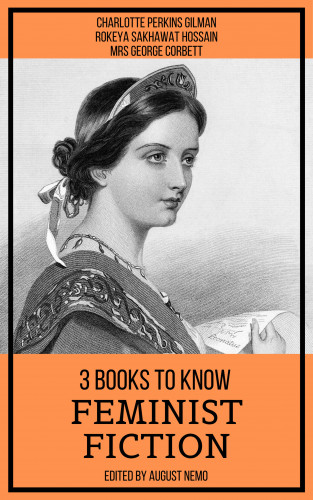 We will always select for you three great works to instigate your mind, this time the topic is:Feminist Fiction.

- New Amazonia: A Foretaste of the Future by Mrs. George CorbettHerland is a utopian novel from 1915, written by feminist Charlotte Perkins Gilman. The book describes an isolated society composed entirely of women, who reproduce via parthenogenesis (asexual reproduction). The result is an ideal social order: free of war, conflict, and domination. It was first published in monthly installments as a serial in 1915 in The Forerunner, a magazine edited and written by Gilman between 1909 and 1916. The story is told from the perspective of Vandyck "Van" Jennings, a sociology student who, along with two friends, Terry O. Nicholson and Jeff Margrave, forms an expedition party to explore an area of uncharted land rumored to be home to a society consisting entirely of women. The three friends do not entirely believe the rumors because they are unable to think of a way how human reproduction could occur without males.

Sultana's Dream is a 1905 feminist utopian story written by Rokeya Sakhawat Hossain, a Muslim feminist, writer and social reformer from Bengal. It depicts a feminist utopia (called Ladyland) in which women run everything and men are secluded, in a mirror-image of the traditional practice of purdah. The women are aided by science fiction-esque "electrical" technology which enables laborless farming and flying cars; the women scientists have discovered how to trap solar power and control the weather. This results in "a sort of gender-based Planet of the Apes where the roles are reversed and the men are locked away in a technologically advanced future."

New Amazonia: A Foretaste of the Future is a feminist utopian novel, written by Elizabeth Burgoyne Corbett and first published in 1889. It was one element in the wave of utopian and dystopian literature that marked the later nineteenth and early twentieth centuries. In her novel, Corbett envisions a successful suffragette movement eventually giving rise to a breed of highly evolved "Amazonians" who turn Ireland into a utopian society. The book's female narrator wakes up in the year 2472, much like Julian West awakens in the year 2000 in Edward Bellamy's Looking Backward (1888). Corbett's heroine, however, is accompanied by a man of her own time, who has similarly awakened from a hashish dream to find himself in New Amazonia.

This is one of many books in the series 3 Books To Know. If you liked this book, look for the other titles in the series, we are sure you will like some of the topics